Trainings for Thai foreign service officials in the early days were based on practice,i.e. learning by doing or on-the-job training and apprenticeship that includes the transfer of knowledge, skills, attitude as well as tacit knowledge passed on from one generation to another. Such training was conducted through mentorship system by “seniors” at the workplace.
In 1962, Senior Colonel Thanat Khoman, former Minister of Foreign Affairs, initiated an official training programme for foreign service officials in the form of “in-service training” conducted mainly through workshops on, for instance, drafting of diplomatic correspondence in Thai and English, understanding of manual of style, regulations and Ministerial Decree. 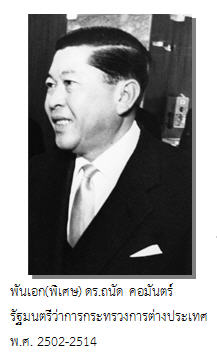 At the beginning, the training programme focused primarily on officials due for postings overseas. Later, it was extended to cover a broader scope of officials including those from other agencies whose departments have overseas offices, such as Ministry of Defence, Ministry of Finance, Ministry of Commerce, and Government Public Relations Department. Main subjects offered in the curriculum include the Ministry of Foreign Affairs’s operation, diplomatic protocol, laws and treaties, economics, and English. In addition, high-level officials, former ambassadors as well as experts from other agencies were also invited to participate in the programme. For instance, in 1966, Mr. Puey Ungphakorn, former Governor of the Bank of Thailand, gave a lecture on economics, Phraya Anuman Rajadhon gave a lecture on religion, and Major General His Royal Highness Prince Wan Waithayakorn, Kromamun Naradhip Bongsprabandh, former Deputy Prime Minister, was invited to share experiences on his tours of duty in the United States.

In 1967, the Ministry of Foreign Affairs realized the need to train Thai foreign service officials in a “routine and permanent” manner. On 12 December 1967, the cabinet approved the Ministry of Foreign Affairs’ request to establish the “Institute of Foreign Affairs” as part of the Officials and Training Division under the Office of Permanent Secretary. Existing training courses were developed into English language courses and four main training courses for the following groups: newly recruited diplomats, officials to be posted overseas, attaché and third secretary, and second secretary and first secretary.

In 1988, the Ministry of Foreign Affairs separated the foreign affairs study centre from the Institute of Foreign Affairs in order to promote the study and research on foreign policy.    Former ambassadors would serve as Director-Generals directly under the Permanent Secretary, in which Ambassador Phan Wannamethee, who served from 1988 to 1994, was the first Director-General of the foreign affairs study centre.